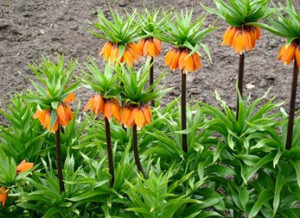 Chessboards (Fritillaria) belong to the lily family. They grow wild mainly in the continental climate zone - in Asia, and also in the western part of North America, all the way to Alaska. There is probably no botanical genus among the bulbous plants, which would be richer in species. So far, about 130 checkerboard species.

The vegetation period of checkerboards is in the spring. During the summer heat, the above-ground part of them is lost and only the bulbs remain in the soil. In the fall, new roots sprout, but the stems with flowers and leaves do not develop until the spring of the following year. Individual species differ in height (some even achieve 120 cm, and others, miniature, only 20 cm), the shape and color of flowers, as well as the size of the bulbs. Some grow out of tiny centimeter-diameter bulbs, others from true onion colossi, whose diameter is 13-16 cm.

The imperial chessboard was first grown in the gardens. It came to Europe in the 16th century., when she was brought from Constantinople to Vienna, and from there to the Netherlands and England. Since then, many other species of checkerboard have made their way into European gardens for good.