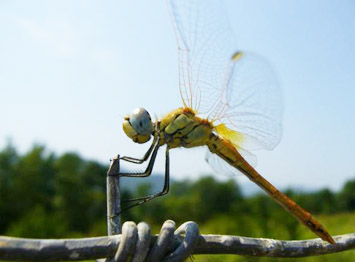 We know these huge insects with the metallic sheen of their wings very well. In summer, their females lay eggs in almost every pond, diving under the surface of the water. After a while, the soaked female tries to take to the air.

However, it turns out, that the wings flutter helplessly, hitting the water surface. Could it mean the death of the female, which, after laying the eggs, simply becomes unnecessary to nature? She can't get out from under the water by herself!

However, this is exactly where the male comes in, who is trying to kidnap his chosen one. It looks like, as if a helicopter was saving survivors from a sinking ship. Unfortunately, the female is clearly heavier than her lovebird and the dragonflies cannot rise above the water…

Then the second male jumps up from the water lily leaf, ten, who has just been driven out of the mating area by the fiancé. Is it an occasion for revenge for him?? No! The second male hugs the first one and only all three can take to the air.

This unusual case of rescue among insects was observed by prof. Armin Heymer, head of the French Laboratoire d'Ecologie General in Brunoy.

Weighty, being real predators among insects, have a phenomenal ability to adapt to environmental conditions. This is best seen when hunting. "On-board computer” dragonfly determines the distance and direction of the victim's flight instantly and guides them to the target. A few centimeters before its prey, the dragonfly adjusts its pace to its flight, to then capture her.
Dragonflies attach great importance to the distinctiveness of their territories of residence, that is, to the flowers and leaves of water lilies. Always though, when one is in danger, the others rush to the rescue. “It's foolish to want to save, they're all about intercourse”- this is a typical reaction of people after hearing the insights of prof. Heymera. Nothing of that – Dragonfly altruism has nothing to do with sex!