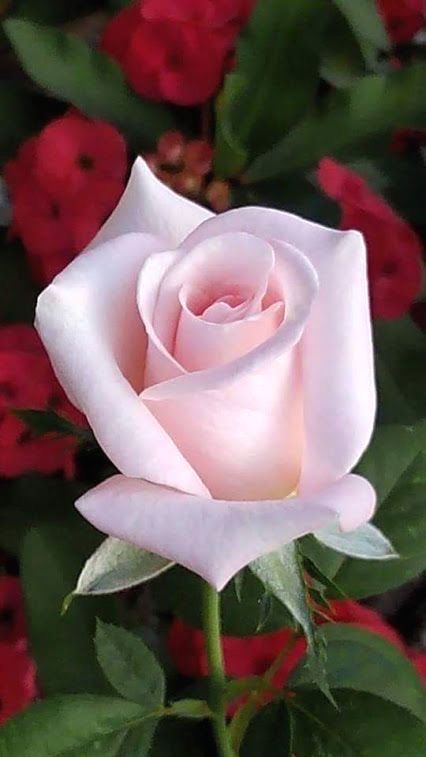 The condition of growing roses for a cut flower. It is very significant, that in our country we hardly meet specially established ones, a large ground plantation of roses for a cut flower. On some farms, however, smaller or larger amounts of rose bushes are grown, but the variety assortment and the way these plantations are managed leave much to be desired. Besides, the yield of such primitive plantations (and thus the profitability of production) it is small, which fundamentally undermines the economic sense of their existence. Considering the reasons for this state of affairs, we come to the conclusion, that it is largely due to competition from these rose nurseries, which their young, annual shrubs are used for cut flowers in the period from July to October, by returning the goods at competitive prices, because they treat it as a by-product. The fact that the quality standard for rose bushes was introduced into the nursery production to a large extent inhibited the frequent use of young nursery material for cut flowers., but still a large supply of flowers should be taken into account, mainly from non-affiliated nurseries, therefore not eligible for annual qualification. This inevitable competition from some nurseries to supply cut flowers to the market is clearly not conducive to the development of special ground cut flower plantations - but does not exclude their existence. Observations from practice show, that such plantations can be profitable provided that they are properly established and properly established, progressive driving. Our flower market demands a very plentiful supply of cut flowers at the end of June, so then, when there is no flowering material in nurseries yet; under these conditions too the cut flowers of the first spring flowering are ensured. Cut flowers in September and October are also in high demand, which also speaks in favor of such cultivation.

The usually low productivity of our ground cut rose plantations is mainly due to their excessive use. We have already come to this in greenhouse cultivation, that we replace the material every 5-6 years, in the ground, however, we exploit the bushes to their complete destruction, which is on average a dozen or so years, so it takes way too long and is wasteful.

As opposed to open flower cultivation, we have a number of farms specialized in greenhouse cultivation in the country. Big ones dominate here, well-equipped state farms, providing high-class production. There are also cooperative and private farms, mainly aimed at growing roses under glass. Progress in this area is enormous; the current production of cut glass roses is many times higher than the production of the interwar period. This is why it is mentioned here, that producers of roses under glass are recipients of large amounts of nursery material, thus they influence its demand and, consequently, the development of nursery production.

The enormous progress in the field of greenhouse rose production concerns mainly cultivation in greenhouses, on flat and raised beds; this crop is commonly called summer. Our standard is used for this type of cultivation, market nursery material, in the best choice, arose from budding on the types Rosa canina and Rosa multiflora.