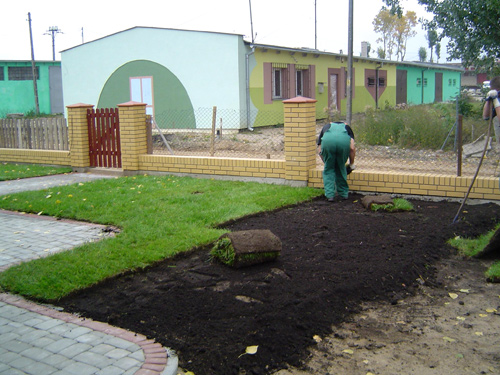 Establishing lawns by moving turf, that is, turfing (roll grass), has been used for a long time. Siphoning is transferring, most often from natural sites, surface layer of soil thick 4-6 cm, overgrown with roots of low plants, usually grasslands. Such a ready-made plant cover is most often used to strengthen fresh embankments and cover small areas of soil in, other purposes, usually decorative.

Due to the very fast pace of construction, there is an increasing difference between the time needed to build e.g.. housing estate and the period, often for many years, necessary to obtain a fully functional green area accompanying such a housing estate. Plant growth cannot be accelerated to such an extent, that the mentioned time differences are significantly reduced. So, similar to how older trees of larger sizes began to be planted, recently, lawns are being established on a large scale by transferring specially prepared turf. This speeds up the creation of a lawn with the assumed functions o 4 weeks to several months.

Lawns established from sowing under very favorable conditions can acquire a decorative value after 4-6 weeks. During this time, the developing plants form a uniform green surface. However, such a young lawn cannot be used for any purpose, with which is associated with trampling or the action of similar mechanical factors. For example, the lawn of a football field must be cultivated and specially cared for by at least 6 months. In practice, the entire growing season is devoted to the preparation of such a pitch. This is one of the reasons behind the long construction and commissioning period for many sports facilities. In this case, the preparation of the appropriate turf in advance and its transfer to the surface of the pitch is of particular importance.

Lawns established by moving turf (roll grass) they are more expensive, because you have to take it off, transport, arranged and properly cared for until it fuses with the substrate. Despite the higher cost of the lawn assumed in this way, adopting such a solution may turn out to be economically justified. Setting up, lawns in this way is sometimes necessary for hygienic reasons, e.g.. in children's gardens.

In many countries, huge areas of lawns are set up by moving specially produced turf. In the USA, for example, over 30 thousand. hectares of turf annually. Turf production is also developed on a large scale (roll grass) in many European countries. An additional advantage of the discussed method of establishing lawns is the ability to significantly mechanize many works related to the preparation of turf.. When establishing lawns on small areas, large-scale mechanization cannot usually be used, and most of the work is of course done by hand, which is expensive. Often such lawns are neglected and the quality of the obtained turf is much lower than that of large-scale preparation.