When was the art of building? Is it possible to determine the date of birth of architecture?? It is difficult to give a precise answer to these questions, and even more difficult to locate the appearance of the first window in time, balcony, loggii, the terrace, bay window. 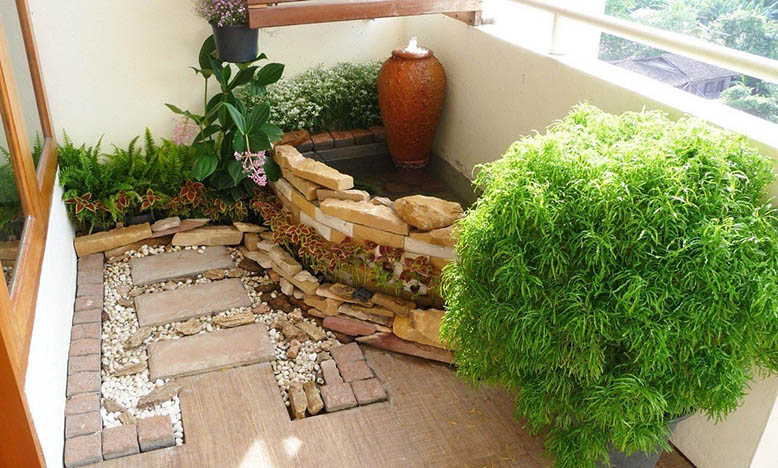 The cave dwellers and the shepherds wandering the steppes were plagued by the cold, rain, wind. You had to create a roof over your head, improve living conditions. The first building was progressing in small steps. It took centuries to improve and transform. The entrance to the cave was broadened and smoothed with the use of stone tools. To protect the interior from the cold, the wind, with rain, curtains were laid out of stones and tree limbs, hides of hunted animals were hung, gaps were sealed with bunches of grass. A larger chink in the stone wall might have been the first window, and the ground slope is even before the grotto – first, stone terrace.

To him made of branches, grasses and skins of the hut were entered through the entrance hole secured with a mat, suspended skin. A randomly made hole in the hut's sheathing acted as a window.

In the regions, where there was no stone for building material, clay was used: made with water, it was used to build mud huts. Tam, where was the cop, a brick was born, initially as a lump of clay shaped into cubes and dried in the sun, later fired. Many generations were content with a one-room house. In the simple ones, boxed four-walled huts, made of clay and wooden logs, there was only one door opening. With time, new rooms were added in a row arrangement, until a closed system with a patio in the middle develops. Grouping houses made a city.

In ancient, at different latitudes with different climates, construction went through various development paths. The whole history of architecture, its development, is derived from the history of a residential house. The cradle of this development are largely the lands lying in the Euphrates and Tigris basins. The roots of European construction and architecture go deep into ancient civilizations, drawing juices from the Sumerian culture, staroegipskiej, Greek, Rzymska et al.

Ancient Hellas is the cradle of our culture. This is where such teachings and names came from, like philosophy, logic, policy, architecture. Also construction – Greek architecture was elevated to the level of art. Greeks, masters in philosophy, literature, mathematics, fine arts, they erected the form and shape of the building to a high degree of perfection, by operating with simple construction elements.

The earliest Hellenic constructions used wood, gline, brick, to master the use of the Blowing Stone. The structural elements were columns and stone beams. The limited span of the beams must have contributed to a fairly modest development of openings in the walls of the buildings. There is a rich diversity of terraces, arcades.

Further, Roman culture made a significant contribution to the development of architecture. Although the principle of constructing arcs was known in Babylon, Egypt, Mycenae, it's only the Romans, heirs of the Etruscans, thus they developed the technique of arches and vaults, that they can be considered new inventors, bold constructions. These arched solutions had a decisive influence on the shaping of window and door openings, building a loggia, terraces, bay window.

Influences of Greek and Roman culture penetrating deep into Europe reached its farthest corners. Also, the migration of construction achievements from the south to all regions north of the Alps consequently created the architecture of western and central Europe. Almost everyone, not necessarily an expert in art history, he learned even modest knowledge about architectural styles at school, how Romanian style, Gothic, renaissance, baroque, neoclassicism. These names are associated with the castles seen, palaces, historic districts of ancient cities.